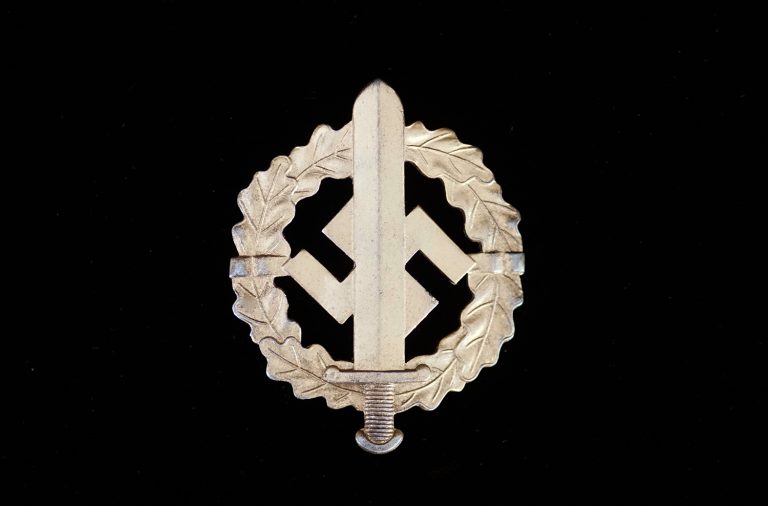 BACKGROUND: The SA, Sturmabteilung, (Storm/Assault Detachment), was originally formed in the August 1921 as a protective guard unit for the political leaders of the fledgling NSDAP, Nationalsozialistische Deutsche Arbeiterpartei, (National Socialist German Workers Party), and as with the NSDAP the SA was structured along paramilitary lines. The SA recruited most of its personnel from the ranks of the various Freikorps groups composed mainly of disgruntled ex-soldiers and was first utilized at a NSDAP meeting in Munich in November 1921. The SA Sports badge in bronze was instituted by SA-Stabschef Ernst Röhm on November 28TH 1933, for award to SA and SS personnel who passed the required criteria in physical fitness, military defence and field exercises. On February 15th 1935, in an attempt to inspire the German public to greater levels of physical fitness, Hitler conferred official national status to the badge and expanded it to include a silver and gold grade. When the badges gained official national status, bestowal was opened to all German nationals who were strongly encouraged to qualify for award of one of the three grades.

PHYSICAL DESCRIPTION: Die struck, magnetic sheet metal, badge with a gold wash. The badge is in the form of a circular oak-leaf wreath encompassing an upward pointing Roman broadsword which is superimposed on a central, canted swastika. Detailing includes veins to the oak-leaves, horizontal ribbing to the sword grip and cut-outs to the interior of the circular wreath and swastika arms. Reverse is a mirror image of the obverse. Raised soldered catch, semi-rounded vertical pin and soldered catch all intact to reverse although the pin exhibits moderate surface spotting. Reverse is well marked with embossed, third pattern inscription, (circa 1939-44), “Eigentum D. Obersten S.A. Führung”, (Property of the SA Supreme Command). Reverse also has embossed manufacturers name and location, “W. Redo Saarlautern”; unnumbered, near mint with +97% Finish to obverse. 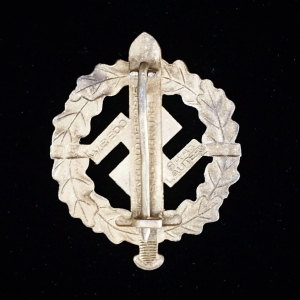 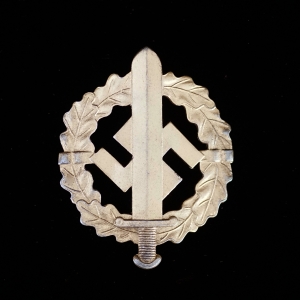