BACKGROUND: The first pattern SS sleeve eagle was officially introduced in May 1936 although photographic evidence indicates that it was in use as early as the summer of 1935. Shortly after its official introduction the eagle underwent minor modifications resulting in the second pattern that was worn for the duration of the war. These second pattern eagles were originally issued in a hand embroidery version for Officers ranks and a machine embroidered version for EM/NCO’s until a machine woven version was introduced in 1939. 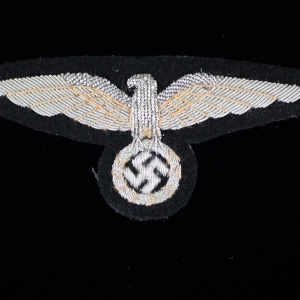