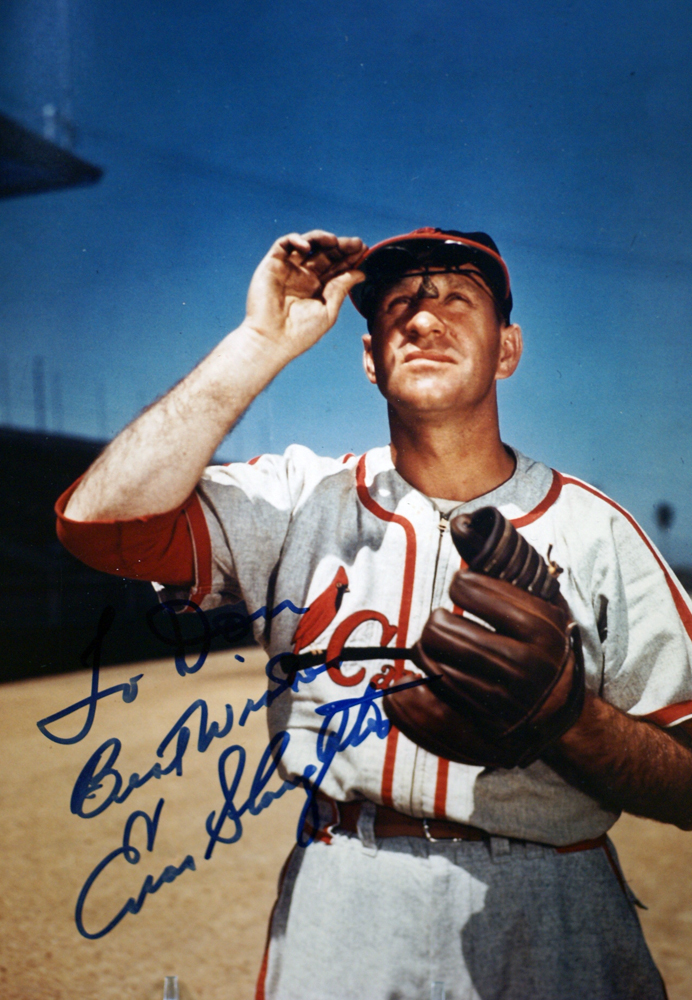 EnosSlaughterEnos Bradsher Slaughter (April 27, 1916 – August 12, 2002), nicknamed “Country”, was an American Major League Baseball right fielder during a 19-year baseball career, he played from 1938–1942 and 1946-1959 for four different teams, but is noted primarily for his time with the St. Louis Cardinals. He is best known for scoring the winning run in Game Seven of the 1946 World Series. Batting left-handed and throwing right, he was renowned for his smooth swing that made him a reliable “contact” hitter. Slaughter had 2,383 hits in his career, including 169 home runs and 1,304 RBIs in 2,380 games. Slaughter played 19 seasons with the Cardinals, Yankees, Kansas City Athletics and Milwaukee Braves. During that period, he was a 10-time All-Star and played in five World Series. His 1,820 games played ranks fourth in Cardinals’ history behind Ozzie Smith, Lou Brock and Stan Musial. He presently ranks second in RBIs with 1,148; fifth in ABs with 6,775; and sixth in doubles with 366. His career accomplishments are especially impressive considering that he missed 3 seasons beginning in 1943 (when he was 27) to serve in the military during World War II. Immediately upon his return from the service in 1946, he led the National League with 130 RBI and led the Cardinals to a World Series win over the Boston Red Sox. In the decisive seventh game of that series, Slaughter, running with the pitch, made a famous “Mad Dash” for home from first base on Harry Walker hit in the eighth inning, scoring the winning run after a delayed relay throw by the Red Sox’ Johnny Pesky. The hit was ruled a double, though most observers felt it should have been ruled a single, as only the throw home allowed Walker to advance to second base. This play was named #10 on the Sporting News list of Baseball’s 25 Greatest Moments in 2001. Original MLB Color 8×10″ Photo signed by Slaughter to a Cardinals Team Mate circa 1980, mint condition.