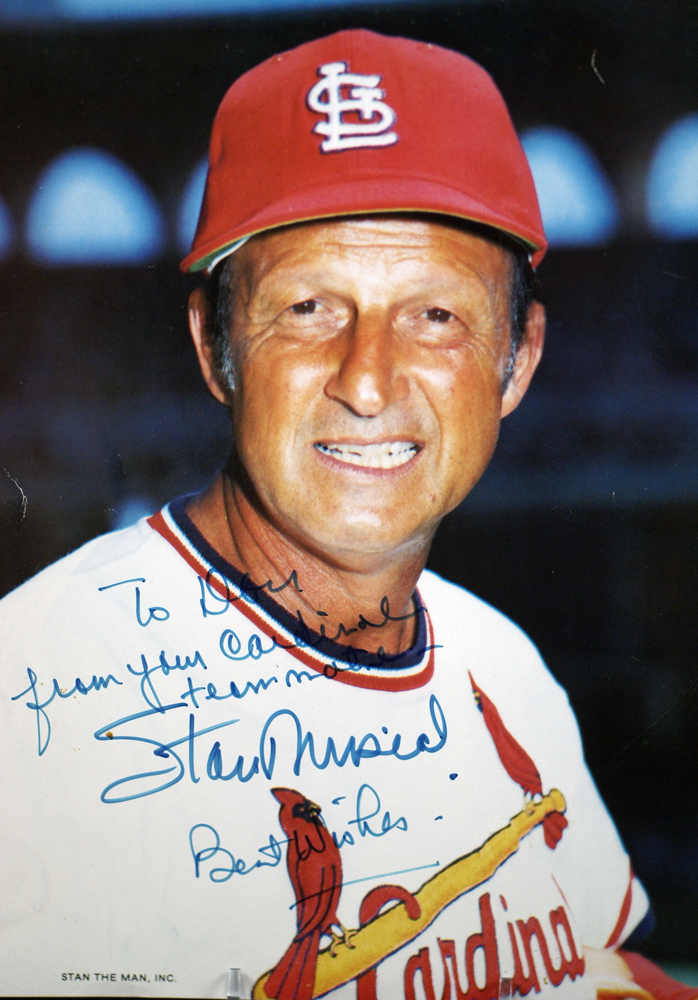 Stanisław Franciszek Musiał; (November 21, 1920 – January 19, 2013) was an American professional baseball player who played 22 seasons in Major League Baseball for the St. Louis Cardinals (1941–1963). Nicknamed “Stan the Man”, Musial was a record 24-time All-Star selection (tied with Willie Mays), and is widely considered to be one of the greatest hitters in baseball history. He compiled 3,630 hits (ranking fourth all-time and most in a career spent with only one team). With 1,815 hits at home and 1,815 on the road, he also is considered to be the most consistent hitter of his era. He also compiled 475 home runs during his career, was named the National League’s Most Valuable Player (MVP) three times, and won three World Series championship titles. Musial was a first-ballot inductee to the Baseball Hall of Fame in 1969. Signed to a professional contract by the St. Louis Cardinals as a pitcher in 1938, Musial was converted into an outfielder prior to his major league debut in 1941. Noted for his unique batting stance, he quickly established himself as a consistent and productive hitter. In his first full season, 1942, the Cardinals won the World Series. The following year, he led the National League in six different offensive categories and earned his first MVP award. He was also named an All-Star for the first time; he would be selected to every All-Star Game in every subsequent season he played. Musial won his second World Series ring in 1944, and then missed the entire 1945 season while serving with the United States Navy. On his return to baseball in 1946, Musial resumed his consistent hitting. That year he earned his second MVP award and third World Series title. At the time of his retirement in 1963, he held or shared 17 major league records, 29 National League records, and 9 All-Star Game records. Musial served as the Cardinals’ general manager in 1967, winning the pennant and World Series. Musial was selected for the Major League Baseball All-Century Team in 1999. In February 2011 the President presented Musial with Presidential Medal of Freedom, the highest honor that can be bestowed on a civilian in the United States. Original MLB Color 8×10″ Photo signed by Musial to a Cardinals Team Mate circa 1980, mint condition.