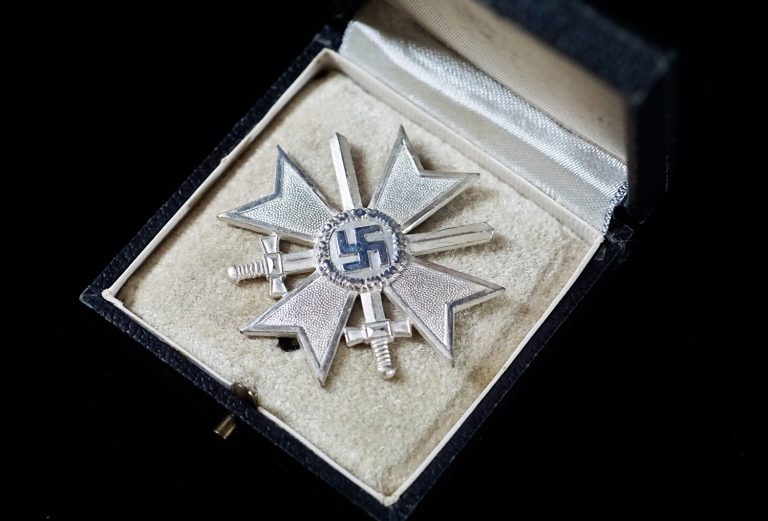 BACKGROUND: The War Merit Cross was instituted by Adolf Hitler on October 18th 1939, in two classes with both classes issued, with and without swords, for award to military personnel and civilians, including females and foreigners, for exemplary service and/or bravery in Germany’s war effort, in a non-combatant role. The addition of swords to the award signifies bravery while awards without swords were bestowed for service. The LDO, Leistungsgemeinschaft der Deutschen Ordenshersteller, (Administration of German Medal Manufacturers), began regulating the manufacture of German awards in March 1941 as a quality control agent for awards that were intended for retail sale and manufacturers were to use an assigned LDO, “L”, code on their products destined for retail sales. Awards that were to be bestowed by the government were also issued an official numerical government contract code known as a, Lieferantnummer, (Contractors Number), that was issued by the Präsidialkanzlei des Führers, (Presidential Council of the Führers), for formally approved manufacturers. The manufacturing firms that were licenced by both the Präsidialkanzlei des Führers and the LDO and would have used the same dies to stamp both the official issue and retail sales types of awards making them virtually indistinguishable from one another except for the markings.

PHYSICAL DESCRIPTION: Die struck, alloy construction bravery award with a german nickel/silver plate is in the form of a Maltese style cross with a circular centerpiece with an embossed, canted, swastika encircled by an oak-leaf wreath to the obverse. The swords, indicating combat, emanated upwards between the arms of the cross. The plain reverse has a soldered, solid style hinge with a broad pin and catch all intact. Maker marked “4” indicating manufacture by indicating made by Steinhauer & Luck, Ludenscheid. The award comes housed in its approx, 7cm square, 2cm thick, pressed cardboard and wood construction case with a black, simulated grained leather covering. The top lid of the case has silvered outline of the War Merit Cross with swords. The interior of the top lid is lined in white satin while the interior bottom of the case has a vertical cut-out to secure the hinge, pin and catch assembly of the badge; box is excellent + and cross is near-mint retaining +97% of its bright polished obverse finish. 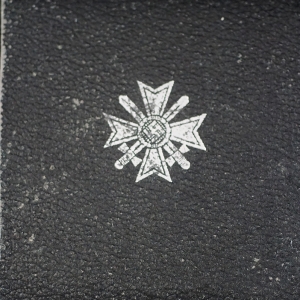 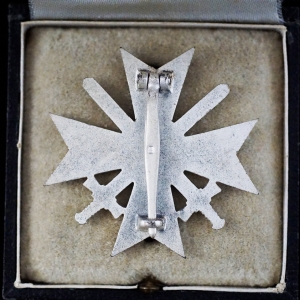 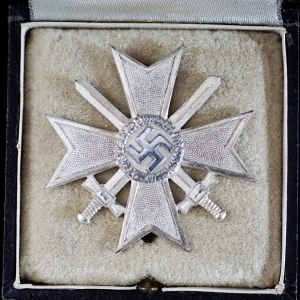