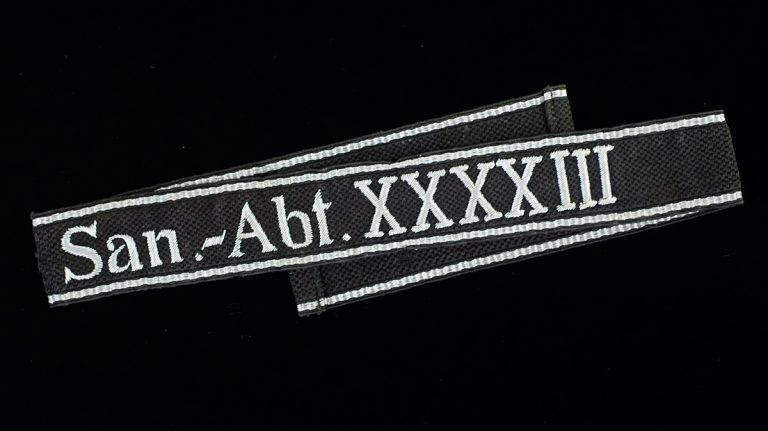 DESCRIPTION: RZM pattern, machine woven, black rayon construction cufftitle with hand embroidered “SAN.-ABT. XXXXIII”, in bright silver/aluminum wire threads. The cufftitle is bordered at both the top and bottom edges in fine, horizontally woven, seven strand, bright silver/aluminum wire threads. The full length cufftitle is the typical, 27mm wide & 49cm long with folded over machine stitched ends. The reverse of the cufftitle has the common bluish fabric patch to the reverse that the embroidered numerals were embroidered into. The original 2 white paper RZM/SS tags are evident at each end. Near Mint and extremely fine; $1350.

BACKGROUND:The command structure of the SS was highly complex and had many different levels and offices with numerous functions. The basic regional organizational infrastructure of the Allgemeine-SS began with the SS-Oberabschnitte, (SS Districts), which correspond roughly to the German Armed Forces, Wehrkreis, (Military District). Each SS-Oberabschnitte contained two or three SS-Abschnitte, (SS Sub-Districts), and each SS-Abschnitte was composed of two to four SS-Fuss-Standarten, (SS Foot Regiments). The SS-Fuss-Standarten were numbered consecutively from 1 to 125 and Officers serving on the staff of a Standarte were authorized wear of an identifying cufftitle with the numerical designation of the unit served with. Of Note: The RZM, Reichzeugmeisterei, (National Equipment Quartermaster), was officially founded in June 1934 in Munich by the NSDAP as a Reich Hauptamt, (State Central Office), and was based on the earlier SA Quartermaster’s Department. The functions of the RZM were not only to procure and distribute items to Party formations, but also to approve chosen designs and to act as a quality control supervisor to ensure items manufactured for the Party met required specification and were standardized. Starting in late 1934 items manufactured for the SS came under the quality control of the RZM. 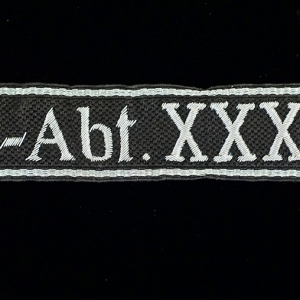 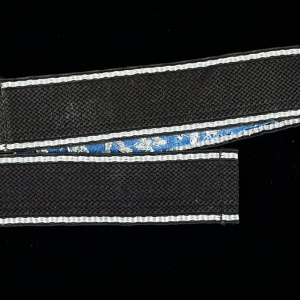