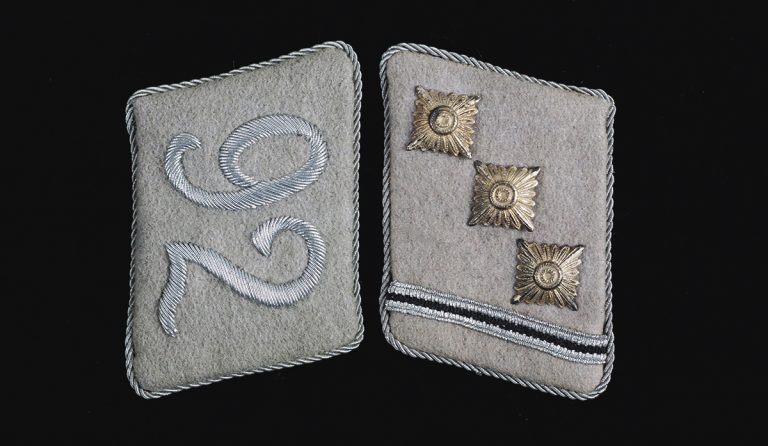 DESCRIPTION: Pair, Light gray wool construction, silver wire-piped for Reserve SS-Obersturmfuhrer of the 92nd Standarte (SS Stammabteilungen); hand-embroidered, unit numeral, “92”, in bright silver/aluminum wire. The pair are mounted on a tan buckram base and the reverse of the numeral tab retains a portion of its black cloth RZM/SS tag likely circa 1935-37; The collar tabs are near mint in unissued condition with minimal age toning; Rare- $1695.

BACKGROUND: For Personnel over the age of 45 on reserve status with the Allgemeine-SS were assigned to supplementary reserve companies or SS Stammabteilungen.

The command structure of the SS, Schutz Staffel, (Protection Squad), was highly complex with many different levels and offices with numerous functions. The basic regional organizational infrastructure of the Allgemeine-SS began with the SS-Oberabschnitte, (SS Districts), which correspond to the German Armed Forces, Wehrkreis, (Military District). Each SS-Oberabschnitte contained two or three SS-Abschnitte, (SS Sub-Districts), and each SS-Abschnitte was composed of two to four SS-Fuss-Standarten, (SS Foot Regiments). The SS-Fuss-Standarten were further divided into four Sturmbann, (Battalions) and a reserve Sturmbann which were again sub-divided into four Sturm, (Companies), per Sturmbann. The SS-Fuss-Standarten were number consecutively from 1 to 125 and starting in August 1929 the SS incorporated the wear of rank collar tabs on the left side of the collar of the service tunic and later, (circa 1933), personnel serving with a SS-Fuss-Standarten began wearing the numerical designation of their unit on the right side collar tab. The SS collar tabs were originally adopted from the earlier rank collar tabs as utilized by the SA, Sturmabteilung, (Storm Troops). The SS collar tabs remained in usage through-out the war with a couple of minor alterations. Officer’s ranks right side unit designation collar tabs had the numerals produced in bright silver/aluminum wire threads while typically EM/NCO ranks numerals were produced in silvery/grey threads. 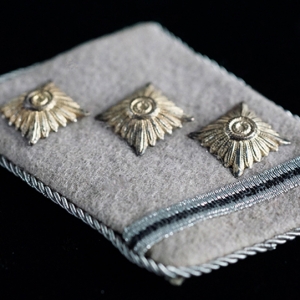 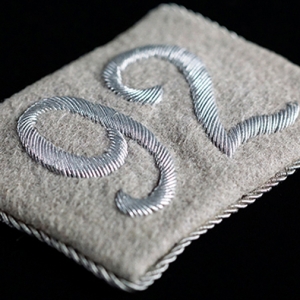 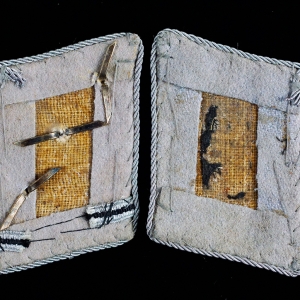 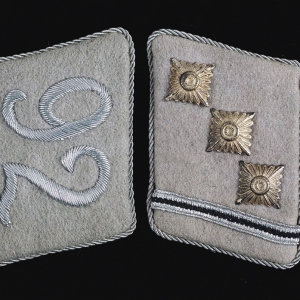